Published: Sep 21, 2017 · Modified: Sep 13, 2022 by Mary Ellen · THIS POST MAY CONTAIN AFFILIATE LINKS · AS AN AMAZON ASSOCIATE I EARN FROM QUALIFYING PURCHASES. 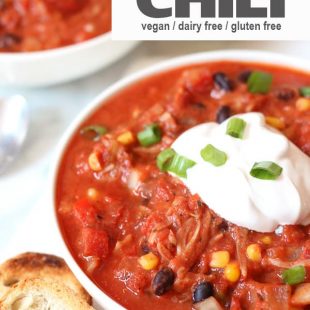 This Easy Vegan Jackfruit Chili is the perfect cozy meal. Loaded with plant-based goodness and zippy flavors, this is the weeknight wonder recipe you've been looking for. With just 10 minutes of prep, you can set and forget your crockpot (or Instant Pot) until dinnertime!

Why You Should Make This Recipe

Why, you ask? Well, here are some great reasons I love this recipe:

If comfort food is also your jam, check out my Cashew Mac & Cheese, Pumpkin Mac and Cheese and Vegetable Bean Casserole.

This simple recipe for vegan jackfruit chili requires just a few ingredients, many of which are probably already in your pantry. Here is everything you'll need:

How To Make Jackfruit Chili

This simple vegan chili recipe is literally as simple as it gets. Here's how it's done:

Step 1: Add all ingredients to a crockpot and stir.

Step 3: Adjust seasonings as needed, then dish out and enjoy! So easy, right?

This jackfruit chili is pretty perfect on its own, but I'm all for adding whatever toppings bring you joy.

And while you can easily eat it straight from a bowl, there's more than one way to enjoy this vegan jackfruit chili!

Finally, feel free to customize this vegan chili to your liking. Swap out any veggies you like, or use whatever is looking a little limp in your veggie drawer.

Here are some excellent vegetables to add/swap in:

If you come up with a winning combination the world should know about, be sure to let me know in the comments below or tag me in your Instagram shots so I can cheer on your creativity!

One thing I love about this vegan jackfruit chili is that I can set it up in my crockpot or instant pot and walk away - how easy is that?!?

Can I make this ahead of time?

Absolutely! This vegan jackfruit chili will last for up to a week in the fridge if stored in a clean, airtight container.

Can I freeze jackfruit chili?

Sure! It should freeze well for up to 3 months. Note that some of the beans may break during defrosting, which can add a bit of extra starch to the broth. Add a little water to loosen it up if needed during the reheating process.

What is the best way to shred jackfruit?

Feel free to use your fingers to peel it into strips, or use my preferred method of shredding it using two forks. You can also try using a hand mixer with the beater attachments!

Ooops, I started making this too late. Is there any way to speed things up? 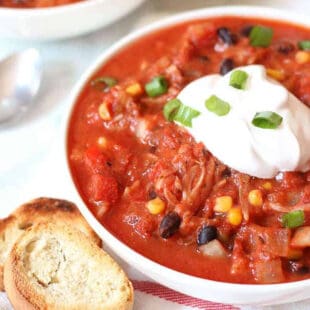 Note on jackfruit: If you're not into the seeds you can discard them. Another option is to add the jackfruit to a food processor and process a few times until it resembles pulled pork.

Mary Ellen Valverde MS, CNS, LDN is a Licensed Nutritionist and Certified Nutrition Specialist who empowers vegans to feel clear and confident about what is uniquely nourishing to them. Mary Ellen's recipes and nutrition information have been featured on Yahoo News, Parade, VegNews, LIVESTRONG, Dr. Axe, Greatist, LIVEKINDLY, Brit+Co, Well+Good, and more.