Published: May 31, 2022 · Modified: May 31, 2022 by Mary Ellen Valverde | VNutrition · THIS POST MAY CONTAIN AFFILIATE LINKS · AS AN AMAZON ASSOCIATE I EARN FROM QUALIFYING PURCHASES.

Smoky, salty, and convincingly meaty, this recipe for Vegan Bacon strips and vegan bacon bits is sure to win you over. Best of all, it takes just 20 minutes to make this plant-based version of everyone's favorite breakfast meat!

Why You'll Love This Recipe

If you're a vegan, I'm sure you've had more than one incident where someone used a single word to counter your thoughtful decision to go plant-based: BACON. My friends, I'm happy to report that you'll soon have an effective retort at the ready. I've finally cracked the code to make the best vegan bacon around!

I can almost guarantee that once you try this fake-on (that's a contraction of fake bacon, thankyouverymuch) you'll be happier than a pig in hooey. This simple recipe is:

Making a passable vegetarian bacon substitute has eluded me for years, but I've finally found the right mix of ingredients. Here's what you'll need:

How To Make The Best Vegan Bacon

You're just 3 easy steps away from the best veggie bacon of your life. Here's how it's made:

Step 1: Make Marinade. Add all ingredients (except soy curls) to a small pot/saucepan and bring to boil. Turn off burner and remove from heat.

Step 2: Soak Curls. Add soy curls to the pot and let sit for 10 minutes to rehydrate. If the liquid does not cover all the soy curls add enough water to cover them.

Step 3: Cook On The Stovetop. Add soy curls (along with the liquid - no need to wring out all the liquid) to a cast iron pan (or pan of choice) and cook on medium heat for 8-12 minutes, stirring occasionally until all the liquid is absorbed and the soy curls are a tiny bit crispy on the outside.

Variation for Step 3: Cook in Airfryer. Wring out the liquid from the soy curls. Air fry at 370 degrees for 4 minutes shake the basket and then air fry for another 2-4 minutes until crispy to your liking.

The directions for making bacon bits are the same as the strips, only the cooking time is a little less.

Instead of cooking on the stove for 8-10 minutes, cook for 5-8 minutes or until the pieces are a little crispy on the outside.

For air frying, cook at 370 for about 6 minutes, shaking the basket every two minutes. Stop cooking when the bits get a little crispy - make sure you don't over-cook because they can get hard if over-cooked.

Omnivores claim that bacon makes everything better. I personally feel the same way about my vegan bacon! Here are a few ways to put it to good use:

What are your favorite ways to use vegan bacon? Let me know in the comments below!

This is the best vegan bacon recipe because it's delicious, healthy, and most of all, EASY. That said, I have a few tricks up my sleeve:

What is vegan bacon made of?

It honestly depends on what recipe you use. I use Butler's Soy Curls in this recipe, but I've seen other versions that use tofu, tempeh, coconut meat, and even rice paper as the base ingredient.

The seasonings I use are also pretty simple: maple syrup for sweetness, tamari for some gluten-free umami goodness, and a handful of spice cabinet staples to round out the flavors.

If we're talking about this recipe, YES!

The only processing that happens in this recipe is quite minimal. First, I should note that foods that have been flash frozen, cooked in any way, canned, or even chopped are considered "processed," so don't go running for the hills just yet.

Soy curls are made from minimally processed soybeans. There are no chemicals used during processing, making them one of the least processed meat alternatives on the market.

Then, we further "process" them by rehydrating in a flavorful marinade and cooking on the stovetop or in an air fryer. So, technically, yes, this veggie bacon has been processed. But, when compared to regular bacon, the processing is nothing to bat an eye at. 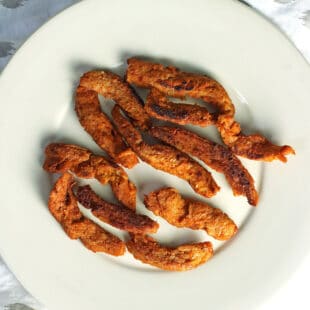 Prevent your screen from going dark

Paprika: If you don't have smoked paprika, you can use regular paprika and ½ teaspoon of liquid smoke. You can skip the liquid smoke if you don't have it but it does make the bacon extra tasty. Draining the soy curls: I usually use my hands to wring them over a colander to really get all the water out but you can also press down on them in the strainer with a potato masher.

Tried this recipe?Leave a comment and ⭐ rating below or tag @v.nutrition on Instagram with the hashtag #vnutritionandwellness